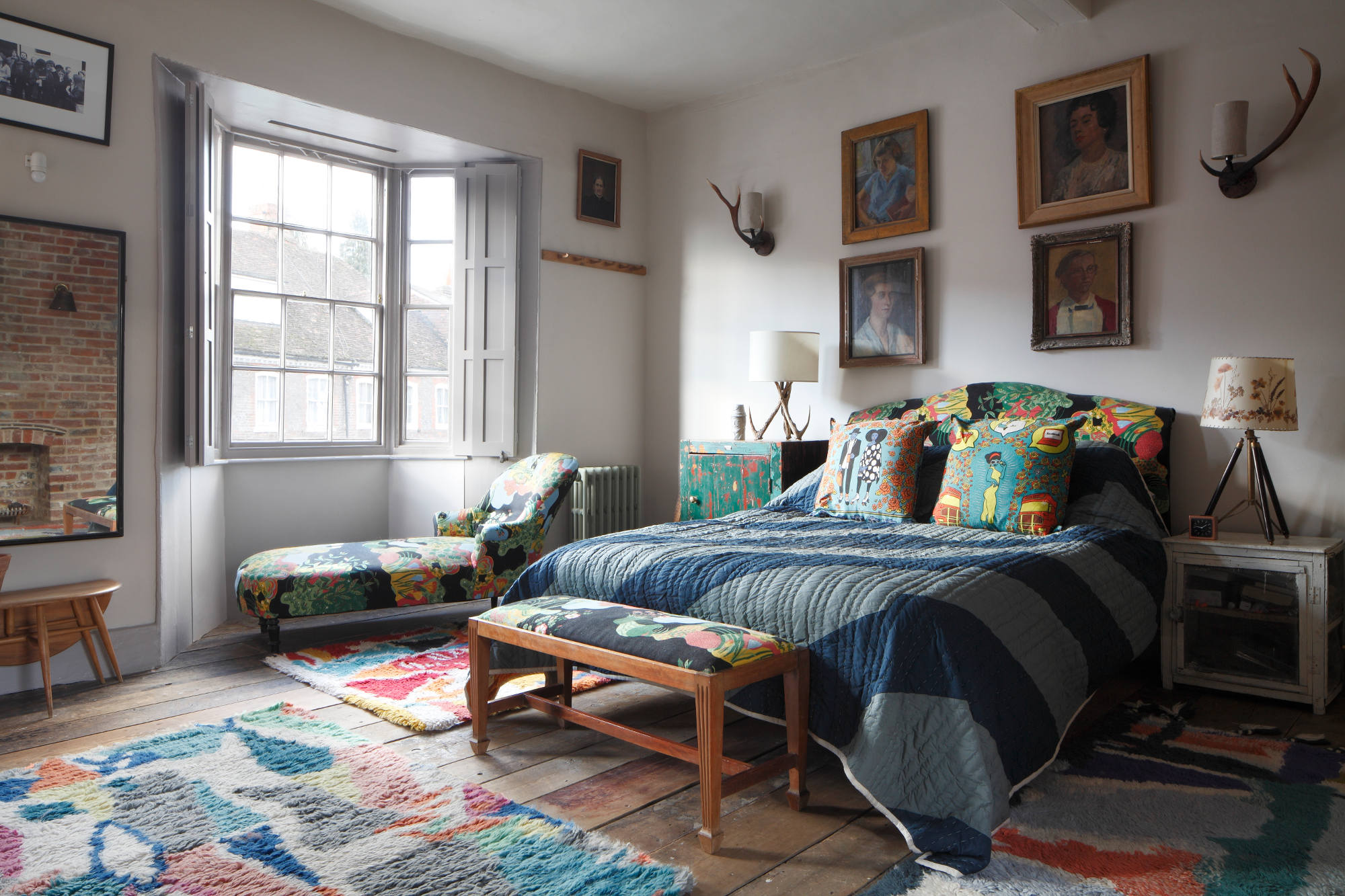 We acquired a five-bedroom townhouse with a 17th century barn and a later edition Georgian frontage. Being Grade Two 2 listed, we took great care in reconfiguring a house to suit more modern living.

Once gutted and stripped back, painted black beams were sandblasted and 1970’s decorative wrought-iron dividers and balustrades were removed – along with rotten flooring. We reconstructed Gable ends with aged oak and reclaimed brick. Street pavers and cobbles were sourced to construct flooring, along with 10” blue and red quarry tiles. Herringbone, ungrouted terracotta Italian rooftiles were laid as a large kitchen diner floor, and a freestanding reclaimed kitchen was constructed.

Meanwhile, two avocado adjoining bathrooms were knocked into one, constructing a bedroom whilst a master suite was stripped back to reveal an original fireplace with floor-to-ceiling stack. A balcony off the bedroom was flanked with clay-tiled roofs and lime mortar marshmallow plastering, so a walk-on roof light and glass balustrade were introduced, creating a bold union of antique and new. 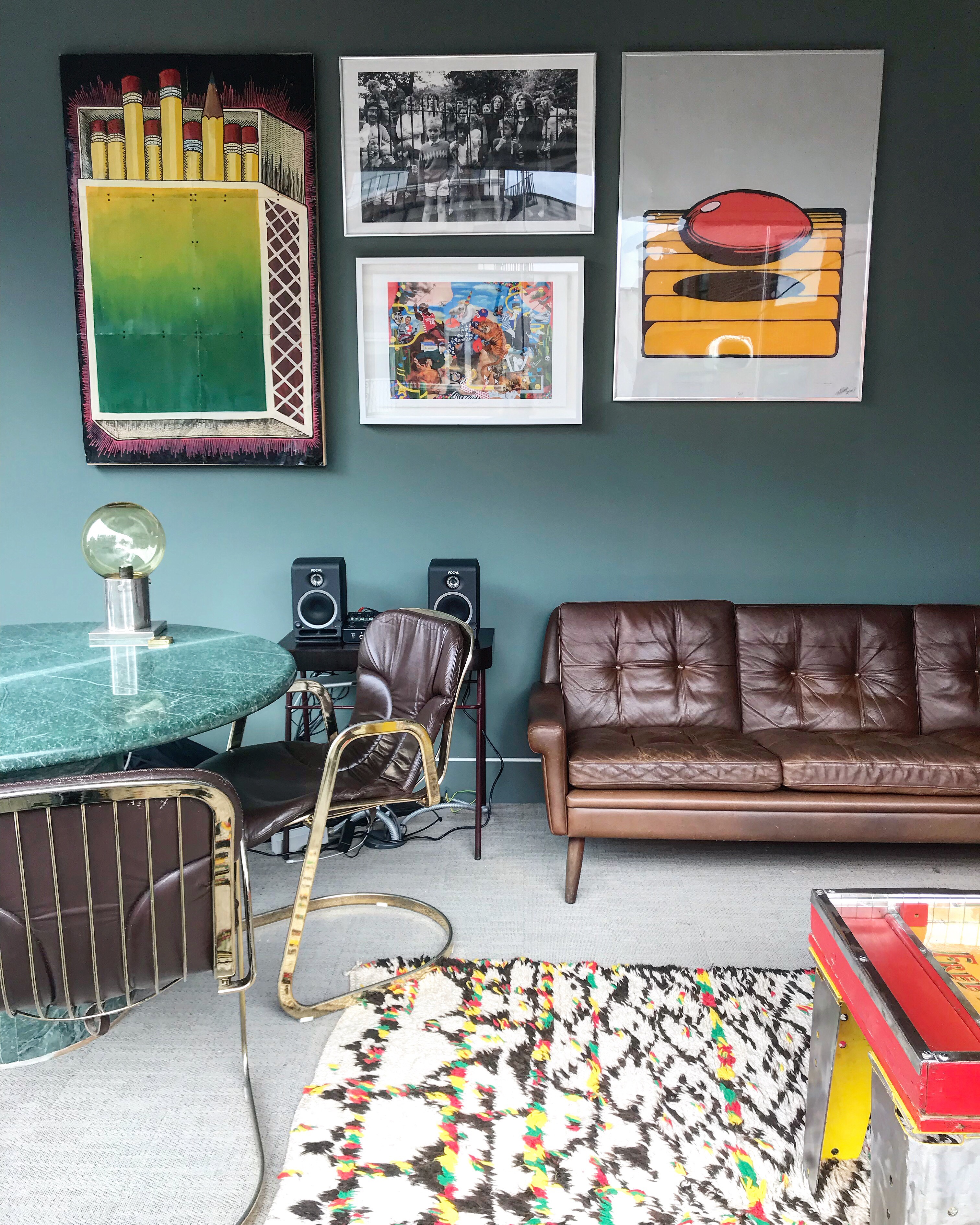 I was asked to source fixtures and fittings for a music executive’s office who had inherited a glass encased white room. The room needed to act as a small meeting room, a workspace and an intimate ‘living room ‘ to entertain artists when in the building. I went for a predominately mid century style which lent itself to the personality of the client and was able to introduce pop culture paraphernalia to reference the strong musical heritage of the record label from this era.

We went for a dark wall colour to add intimacy and mood and sourced a collection of artwork ranging from artist prints, original pop art and painted metal structures. The focal point of the room is a 1960’s tombola machine which was converted into a coffee table to add real fun to the space. The art walls can be added to In line with the musical landscape. 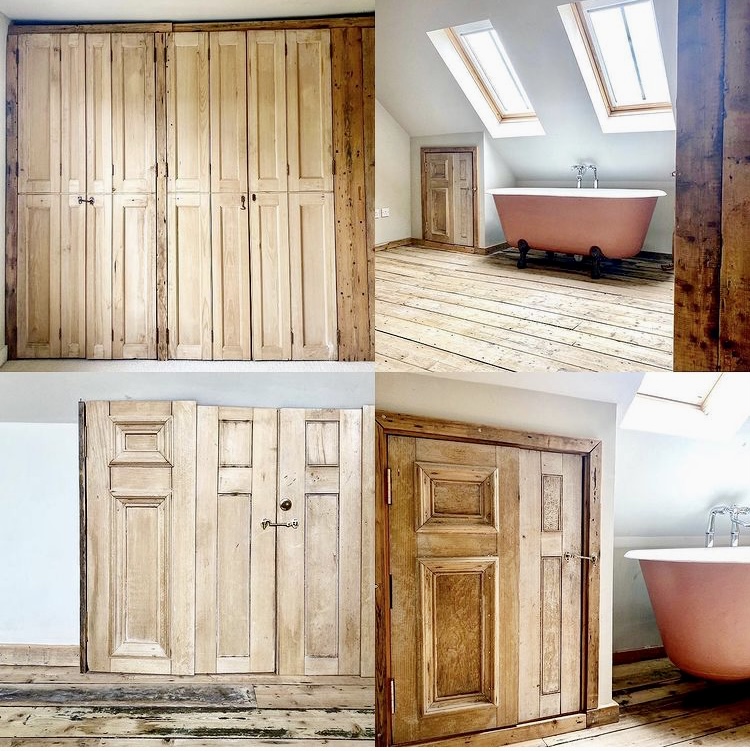 We designed a loft conversion in a small Victorian worker’s cottage. The brief was ‘space saving with reclamation’! We sourced reclaimed pine from Lassco to cover the floors and used the excess to clad a freestanding wardrobe and construct skirting. 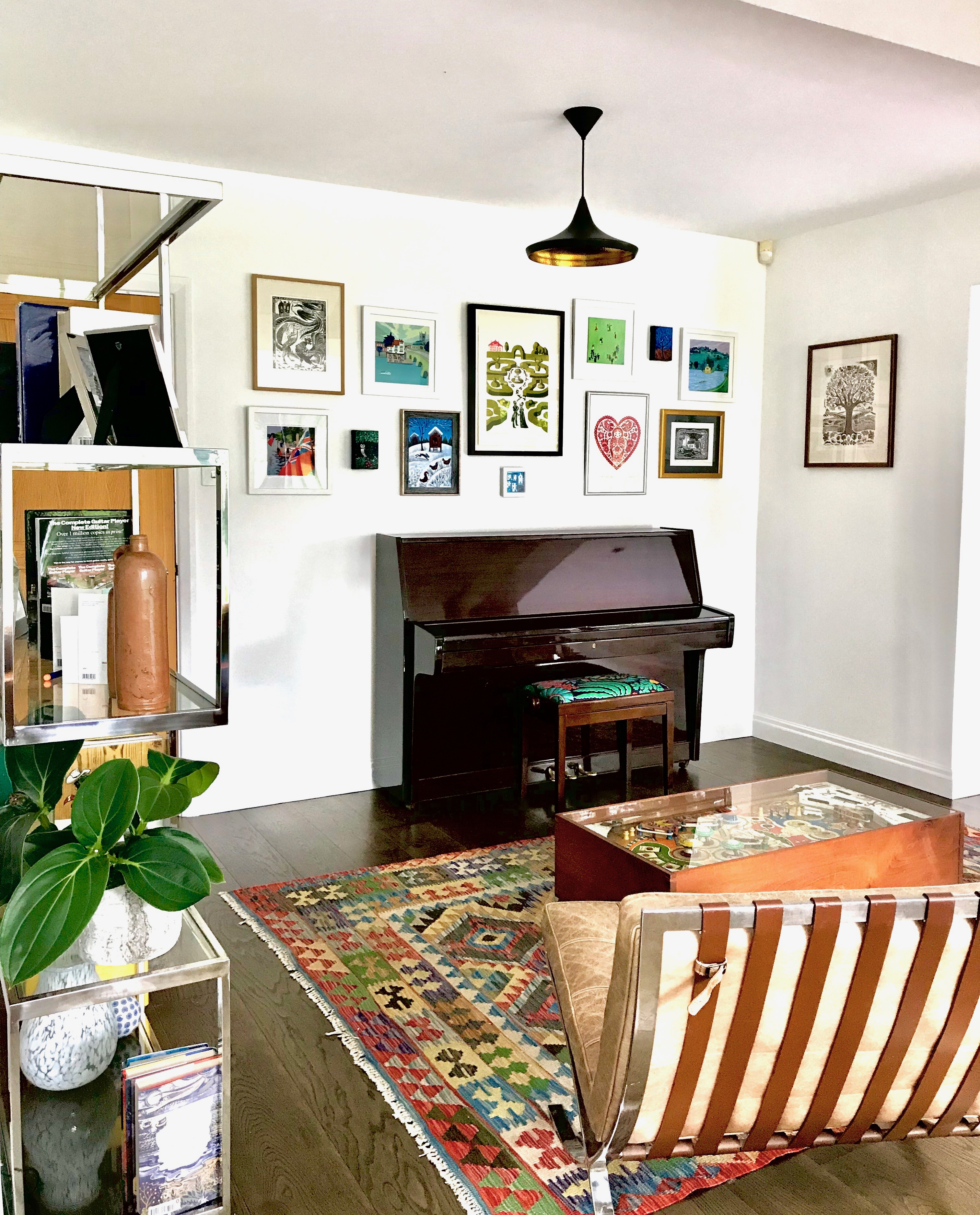 We were given a brief to section off a part of a room to make a more intimate space where the family could listen to and play music. The client wanted to keep a white backdrop so we zoned the room with a Turkish rug, placing Barcelona chairs opposite a piano with a reclaimed 1960’s tombola coffee table at the vortex to bring the conversation space to life. The clients like modernist furniture so the shelving and chairs encapsulated that neoteric feel whilst the fabrics, textures and artwork brought warmth to the space. 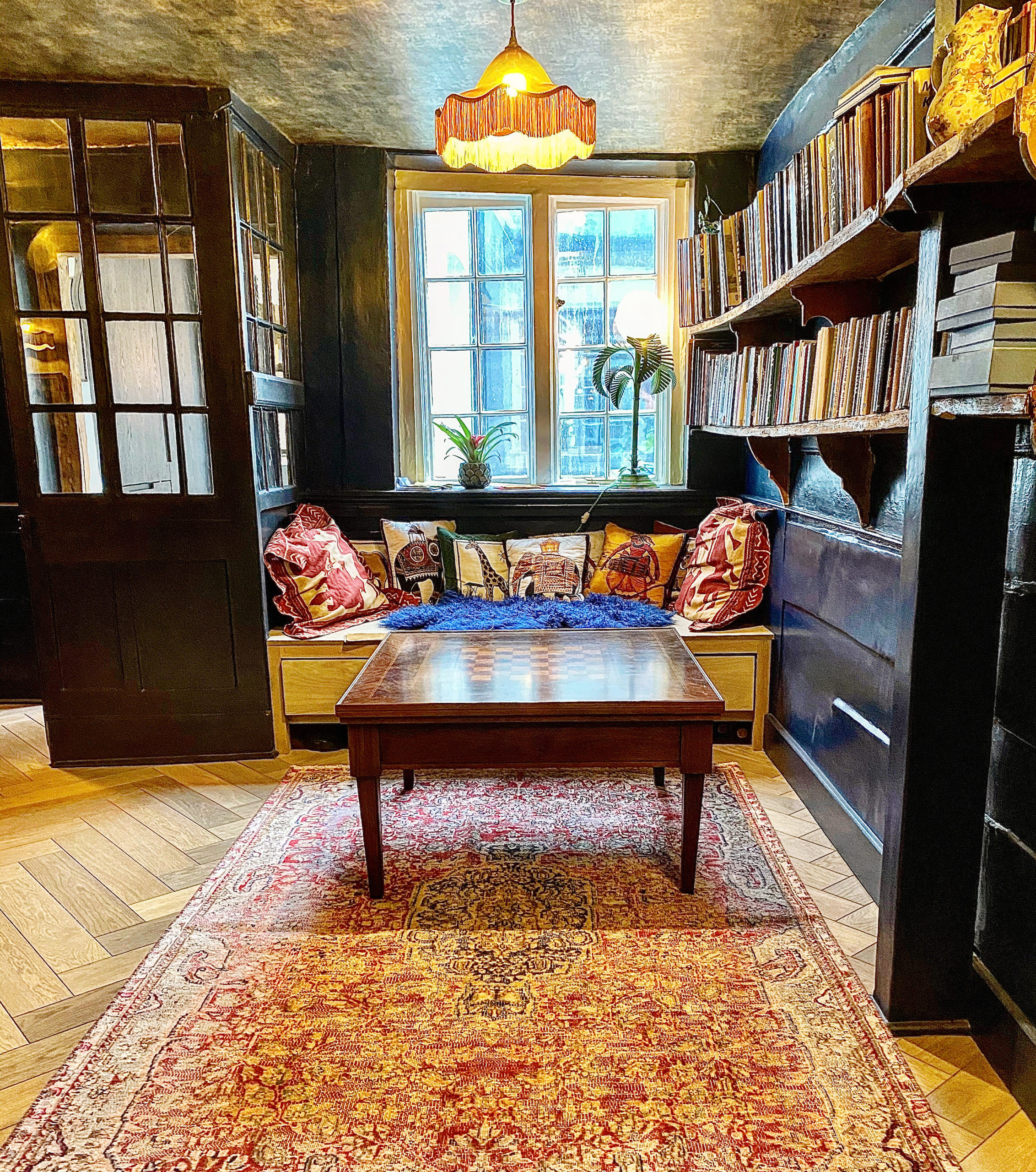 We were asked to help with the renovation of this magnificent townhouse in the centre of Highgate. The property is listed – originally dating from 17century with later additions during the 18th and 19th century’s. We worked with panelled rooms , were able to have original flooring wire brushed by hand then oiled. The creative client had a strong sense of colour so we were able to use bold colouring throughout – working with strong accent colours and the natural patina of the wood. Antique pieces were sourced from far and wide which were complemented by re- dyed Persian rugs and ikat fabrics. New parquet was addded in varying sizes throughout were the old boards couldn’t be used and gold ornate reproduction radiators added to accent the darker rooms. The result is modern take on a period home with playful features and a historic ambience. 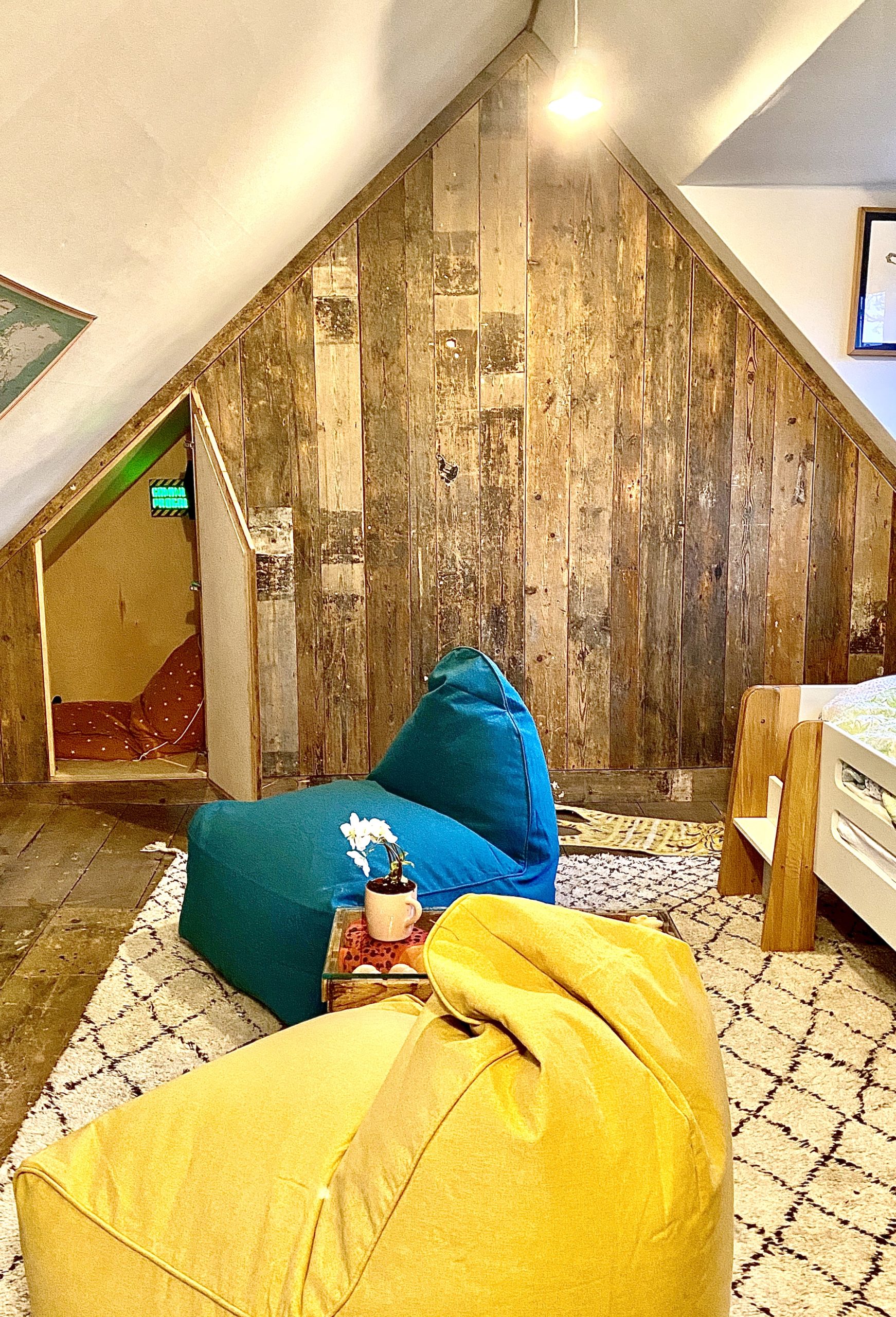 When tasked with updating a childs bedroom it is always paramount to get the input of the child – no matter how much the designer would like antique wooden toys and pretty linen….a ten year old may feel differently! With this bedroom the little boy wanted to get rid of his ‘childish’ bed on stilts and create a more grown-up contemporary space- he didn’t want to part with all of his toys so we had to imagine a unit that would have longevity and disguise clothes, games, books, a desk etc. Continuing the theme of the rest of the period property we used reclaimed pine to seal off the end of the room with a wall of secret wardrobes, disguising a myriad of sins while creating an effect of space and elongating the floorboards to wall height. Behind the wall of boards we created, draws, hanging, storage, a pull-out desk and the all-important secret den ( complete with iPad shelf and charging ports! )The exposed boards were continued into the en-suite where a clean white traditional bathroom was constructed – but clad in the same boards to continue the theme. 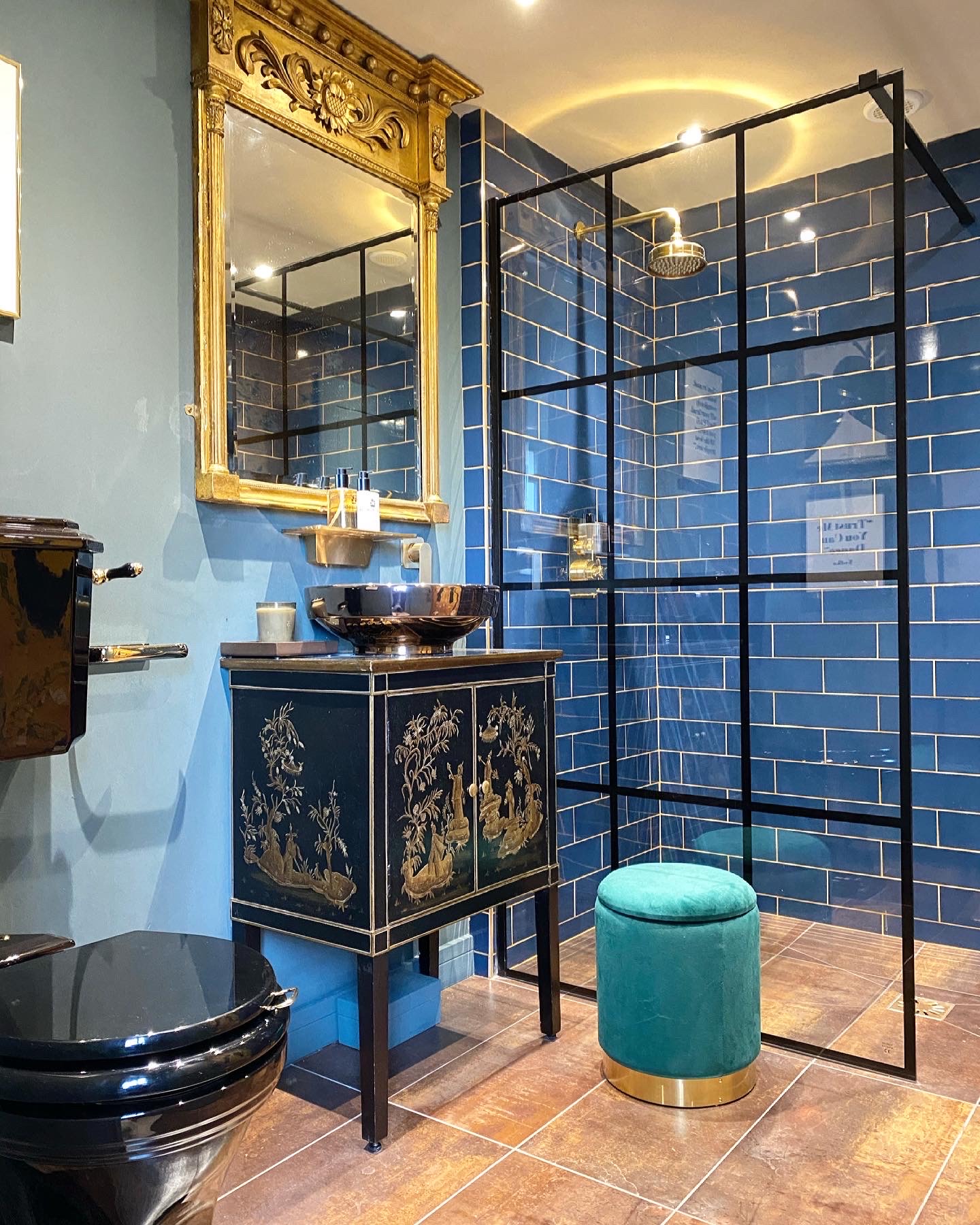 We were asked to design an annex for a client who incorporated a gym, a bathroom and a bedroom with kitchenette. The client had a wallpaper sample she loved so we designed the space around that with a firm, ‘Annabel’s’ brief. The client was very receptive to the black loo and chinoiserie sink cabinet and we used dark colours to add glamour. The bedroom was a more sophisticated proposition with more muted colours but we carried the green up from the bathroom to add continuity. It’s great working with smaller spaces – you have to be more imaginative with your planning and cohesion. Glamour on! 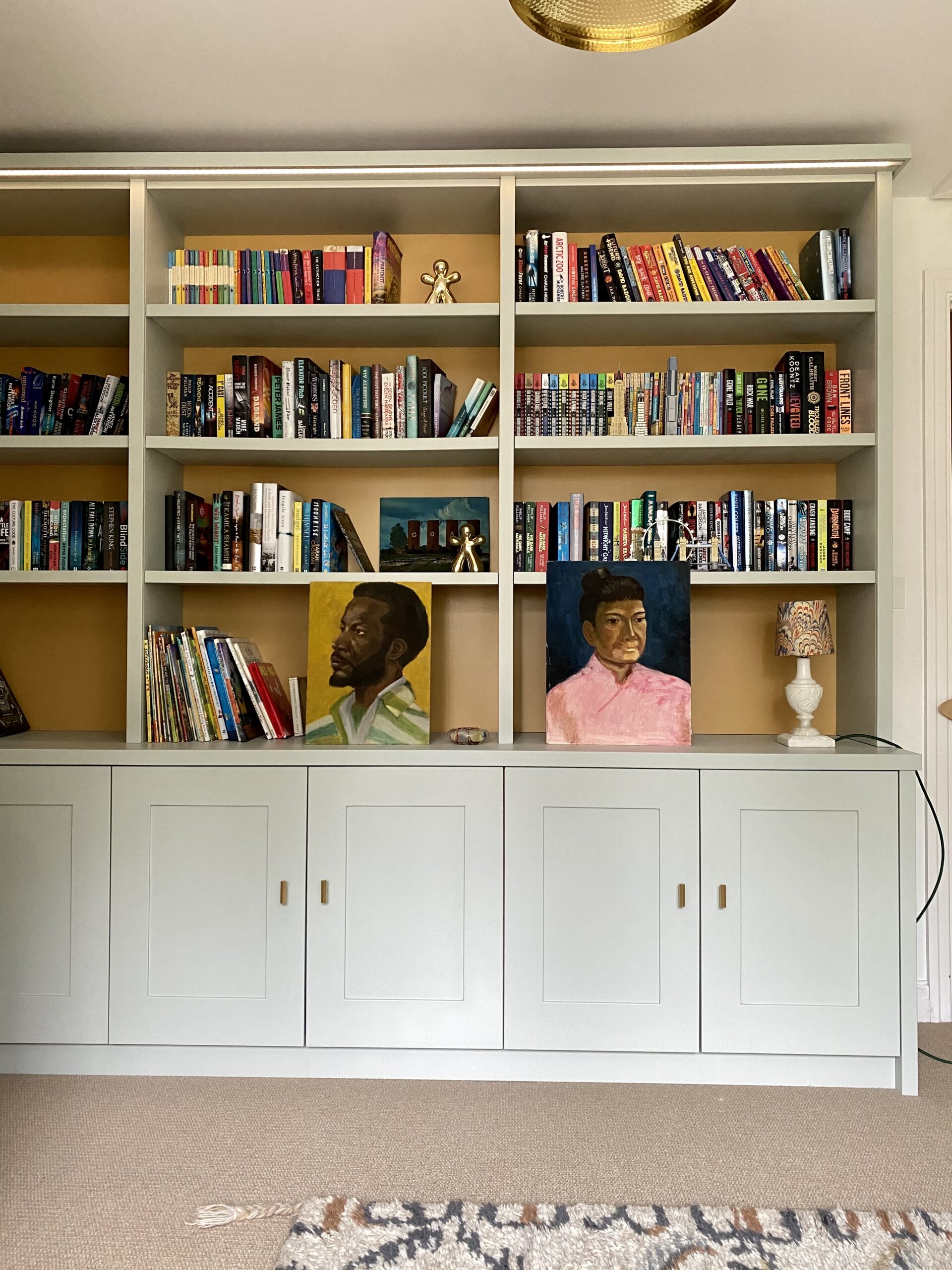 We all want to get the most out of our houses, aesthetically and functionally. On this project we were faced with a quandary of a space outside the children’s bedrooms which had become a dumping ground for toys but not used as a useful space. We added bookshelves and storage and a wonderful window bench for the kids to settle down and read and play board games. Colours added warmth and personality and the kids now fight over the bench.